An original member of the NYCFC Youth Affiliate League, TSF Academy will be a continuing our official club affiliation with the MLS franchise through the City Select League (CSL), which will commence play in fall 2019. 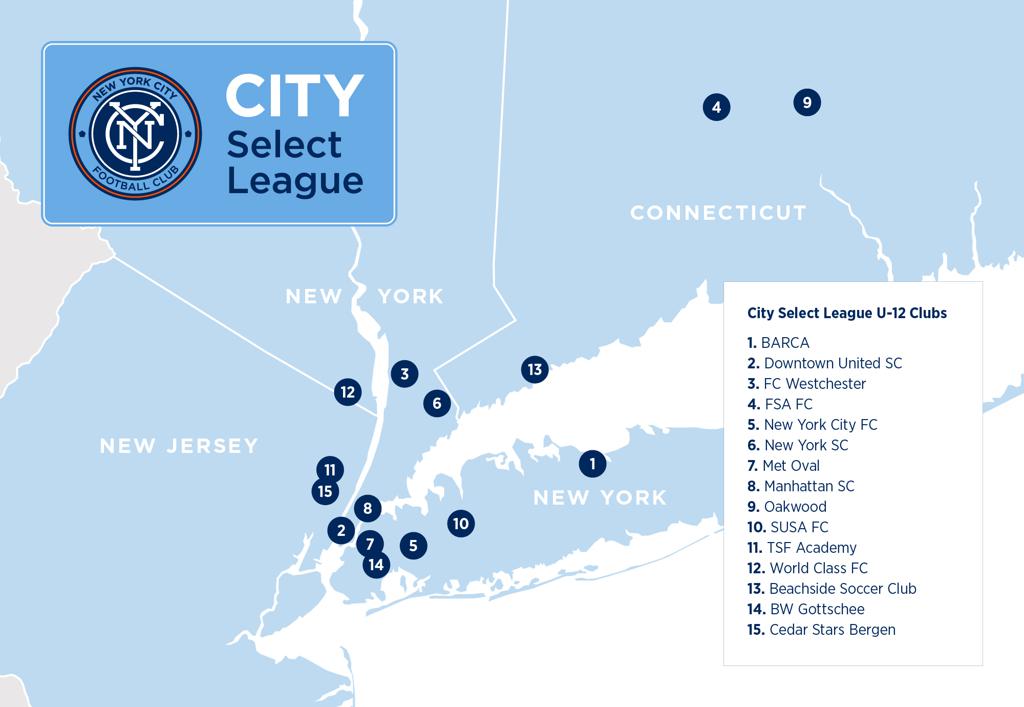 When asked, Boys Director of Coaching, Lee Bakewell commented, "We are extremely happy to be part of the City Select League and after many conversations with NYCFC and Sam Pugsley, that the environment created via this league platform will be the best thing for our players and our club for many years to come.  There are so many options out there these days for parents and players to choose from, but our goal has always been to align ourselves with the clubs and governing bodies that believe in creating the best environment and competition platform, putting the players first.  We look forward to a long lasting relationship as an affiliate to NYCFC and can't wait for the Fall season to begin"

NYCFC Academy Director Sam Pugsley said: “With the U.S. Soccer Development Academy dropping the U-12 age group starting in the fall of 2019, we had a natural platform to expand our youth league to the U-12 age group, while also including a number of new clubs in the area. Moving forward, we’re confident that the City Select League will offer clubs in the broader Tri- State area an optimal competitive platform for player development and pathway.

“We’ve reached out to and chosen some very good clubs that will help facilitate the launch of the City Select League. They know and understand what we’re looking for and what the general philosophy and overall ethos of the league is.”

NYCFC Sporting Director Claudio Reyna added: “The City Select League came from NYCFC as a Club wanting to connect and have relationships with local youth soccer clubs in the area. We’ve done that from day one and for us it’s been very important to make sure our door is always open.

“Creating a competition that we oversee and manage will ensure it’s the right environment for youth players in the Tri-State area. It’s really unique amongst MLS teams and it is important to continue every year to develop more and more relationships with the local soccer community and this is one big step towards that.”

At its core, the league enables young players to compete, learn and grow within the structure of Academy soccer. The City Select League concentrates on four main pillars:

Pugsley added: “The general ethos of the league has been to share common sporting values that maximize player development and we hope we can extrapolate that out to the wider group as we look to expand to the U-12s and include outside clubs.”

The League will be registered and operated under the New York Club Soccer League (NYCSL) structure. This provides a centralized platform for teams to register and creates fluidity for players in a club to move up and down age groups appropriately according to their individual development. Founded in 2009, NYCSL is fully sanctioned by US Club Soccer and is a platform for the New York area with over 1600 registered teams currently playing in multiple leagues.

New York City Football Club is an American professional soccer team based in New York City that competes in Major League Soccer (MLS) in the Eastern Conference of the league. It was announced as the League's 20th franchise on May 21, 2013 and is the first and only MLS Club located within the five boroughs of New York City. Majority owned by City Football Group (CFG), New York City FC plays its home games at Yankee Stadium, which is also home to minority owner, the New York Yankees. Now in its fifth season, New York City FC kicked off its inaugural MLS season in March 2015 and has former US National Team captain Claudio Reyna as its Sporting Director and Domènec Torrent as its coach.