We welcome back John Saunders to the club in new role as Sporting Director. 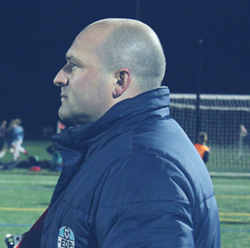 TSF Academy is pleased to announce John Saunders will be re-joining the club as President and Sporting Director.

John joins the club as part of our ongoing restructuring, as we continue to invest in people to build one of finest player development staffs in the region. John will oversee all aspects of club development and work closely with all staff on our future direction.

John, who holds the highly prestigious UEFA 'Elite Youth A' License and UEFA 'A' License, brings vast knowledge and experience back to the club he played a huge part in building. John, initially joined TSF Academy in 2006, spent time as Technical Director at EDP, Technical Director at Princeton Soccer Association, and most recently as Academy Director at CSA Monmouth.

As a youth player, John developed at both Everton FC and Liverpool FC prior to his professional career with Oldham Athletic FC in England, which unfortunately ended prematurely due to injury. During his coaching career in England, Saunders held positions with the recognized international clubs, such as Liverpool FC and Wigan Athletic.

" Returning to TSF is a special moment for me. I have a lot of amazing memories from my time with the club, and have been fortunate enough to be part of it's impressive history. TSF Academy was the club that helped me develop as a coach, director and person, which I have not forgotten. Now, I have the opportunity to once again help take the program to the next level, with an impressive team of directors, coaches and staff beside me".